The last few years have been very hard on local churches. Many have struggled to adapt and then readapt to changing circumstances. Sometimes these changes have occurred in the context of internal conflict over COVID responses, which have further drained energy and damaged unity. In one denomination requests for help from congregations are already 50% higher than last year – and we’re only halfway through the year.

In this environment, it’s easy to see how global mission could take a back seat. Who has the head space to think about people far away, when there are so many things to sort out for this coming Sunday?

Against this backdrop, here’s a reminder of ways global mission helps local churches:

1. Global mission is the natural outworking of any healthy church

We can see from the gospels and the books of Acts that global mission was the goal of our Lord (Matt 28) – although perhaps the order of Acts 7-8 shows they needed a bit of nudging. I doubt anyone reading this article would disagree with the intention of mission, it’s really the timing that’s the issue. Wouldn’t it be better to put off thinking about global mission until local things are a bit better?

The danger here is that it might be quite a while before things ‘get better’. We can see that the NT church carried on global mission in the context of persecution (Acts 7) and poverty (2 Corinthians 8) – maybe we should do the same? Plus who defines ‘better’, and how do we measure it? Will it ever be the right time to start global mission again?

In addition, delaying or postponing an activity of a healthy church is unlikely to help it become healthier. I’m currently undergoing physio for a minor complaint, and to be honest it’s pretty painful. But I know I am getting better because my wife tells me I am complaining less. So perhaps doing the things a healthy church is supposed to do, even when they are difficult, will help the church be more healthy.

Next time you go to a restaurant, have a look at the wine list, even if you don’t drink wine. Check out the prices of the bottles and see if there’s one there for what seems to be an outrageous amount, often hundreds of dollars. You’d be surprised how many restaurants have just such a bottle on their menu. Who would order such an expensive thing? How many would they sell? The answers to the above are ‘probably no one’ and ’probably not many’. Then why is it on the list? Because of a phenomenon called ‘anchoring’ or ‘priming’. The $300 bottle that nobody buys makes the $50 look pretty good value, and the restaurant can sell a lot more of those. ‘Anchoring’ or ‘priming’ is a well-known psychological phenomenon that’s easily google-able.

What’s this got to do with global mission? Well, if I’m told about how Dave and Sarah can do their missional thing across the world in Egypt, then my doing my missional thing across the street seems a lot more reasonable. But if the limit of my imagination is already set at ‘local’, then local becomes the scariest and most daunting thing I know. Anchoring faith in global mission helps local mission be imaginable.

If this all sounds like slightly-suspicious psychology, I’d encourage you to read Hebrews 11. The famous roll-call of the pioneers of our faith is clearly an exercise in anchoring. Hebrews 12:1 starts with, ‘Since we are surrounded by such a great cloud…’ If they ran the race, then we can too run it too. Just as the $300 bottle makes the $50 bottle look reasonable, so the knowledge that our ancestors were willing to be ‘sawn in two’ for their faith, makes me, talking about Jesus to my football friends at the expense of feeling a bit silly, look quite reasonable.

We served in a country which was so small that on most world maps the dot for the capital city was actually bigger than the entire country. Most people had never heard of it, and even fewer could find it on the map. But people probably pray better if they can imagine something, and especially if they could imagine the neighbourhood our country was in. How could we help people understand and remember where we were going?

Our church had a retired guy who did a lot of woodwork, and we asked him to make a jigsaw puzzle of a map of our region. Our country was just a dot, literally the head of a small nail driven right into the wood. On the back of the larger countries were some prayer points about those places.

This puzzle became a favourite item both on our display and in our small group presentations. It gave ‘hands-on’ people something to do, and competitive people timed each other to assemble it. The points on the back of the larger pieces also really gave direction and focus to our prayers. So it engaged not only a retired woodworker but also a whole lot of other people along the way.

Any carpenters out there probably already know the very first person to be ’filled with the Spirit’ in the Bible is Bezalel (Ex 31), a designer and maker of ‘all kinds of work’. With a bit of creativity and encouragement, the work of global mission can likewise engage all sorts of people. I’m not sure our friend had even been called on to use his gift of woodworking for the church, or if he considered himself ‘spirit filled’ – I suspect as a good conservative old-school Baptist he’d probably didn’t! But nonetheless, his gift inspired and encouraged many people, and is still in use some 25 years later.

When it’s done well, the global mission of Christ engages the whole local body of Christ.

I once learned how to present the gospel using a very simple outline. At the time it was revolutionary for me, and I think perhaps I had not really understood the gospel until that point. I can still remember most of it, including the parts that talk about God as ‘the loving ruler of the world’ and us ‘rebelling against God’. I still think those points are theologically true, and perhaps even more morally obvious than ever.

But not long ago I noticed a billboard while driving. Advertising the latest mobile phone, the tagline was something about ‘breaking the rules’. So somewhere some smart people have been paid a lot of money to find ways to convince you to buy a very expensive thing, and the best way they can think to convince you to do that is to talk about how great it is to break rules.

When our culture now generally accepts that rebellion and rule-breaking are actually quite good things to do, or at least interesting and attractive enough to convince you to part with a substantial wad of your hard-earned, then what will people make of a God who is a ‘loving ruler’? And the terms in which we phrase the problem – breaking the rules – are the very terms used to sell overpriced gadgets. While the reality of our sin hasn’t changed one bit, the language around us certainly has.

So, how do they do it? Where do they start? What methods do they use to understand the deeper values and beliefs of a particular group? Those of us in local mission could learn a lot from our friends in global mission

With over 50% of the population either born overseas or having at least one parent who was, we’re a migrant nation. I’ve recently moved back to the suburb I was brought up in, living right near the primary school I attended as a child some 40 years ago. Walking out the door at pick-up time clearly shows how much the suburb has changed. My primary school photos are 100% blue-eyed and blond-haired Anglo Saxon – well my hair was a lot redder than most, but you get the idea. School photos are not going to be very different. It's easy to spot the mum in hijabs, and sometimes the Islander dads stand out too. And there are so many kids with dark hair – maybe Chinese migrants - that they really don’t stand out at all. I wonder how many different languages are spoken in these homes?

Forget uber-eats, it’s now uber-mission. Global mission has been home delivered, and if our local church can’t connect across cultures, then the suburb is simply going to move on. We’ll still be caught in the tail end of the 1960s and living out White Australia Policy, but the suburb will have gone global.

What if none of the above really matters, and none of it helps local mission one iota? Maybe it’s worth a local church being part of global mission even when it doesn’t help. Maybe it’s worth it just to push back against the green-eyed monster of selfishness.

Do we really want to be people who only ever do things that benefit ourselves? What kind of people would people like that become over time? Surely it can’t be good to allow a kind of institutionalised selfishness to guide us? It’s a good thing that the eternal Trinity didn’t think like that, or we probably wouldn’t exist!

So maybe it’s worth investing in global mission even if it doesn’t, and sometimes because it doesn’t, help the local church. It’s a good thing that the eternal Trinity didn’t think like that, or we probably wouldn’t exist!

Almost last but not least – global mission is an excuse to have fun. Preparing to write this involved talking to half a dozen leaders from local churches that are renowned for doing global mission well. One of the most compelling motivations offered was that global mission is a celebration of what God is doing. One church, in particular, goes all out for each home assignment. They decorate the hall, put on food, and have a Spanish fiesta to welcome their workers from Spain. Stories are told, music is played, partying is done, and God is glorified.

By the time I’d finished talking with the leader of the above church, I wanted to join! I have a sneaking suspicion that I’m not the only person who thinks this way.

8. It glorifies the Lord Jesus

Finally, the most important way that global mission helps the local church is that global mission helps more people praise Jesus better. In the midst of budget worries and mask mandates and working out seating plans to maximise the 1.5 metres, it’s been easy to forget that the local church doesn’t exist for itself. We’re not just about us, we’re the body and bride of Jesus. We don’t exist for our own benefit, but to glorify our Lord Jesus – to make him known, and better known.

So even if global mission never helps the local church, and it’s still really boring, it’s still worth doing for Jesus’ sake. And perhaps it’s worth participating in global mission on the days when it’s hard and distant and dull to remind ourselves that it’s all about him. If people we’ll never meet in places we’ll never go know Jesus better because of what we’ve done, then we’ll have done a very good thing. 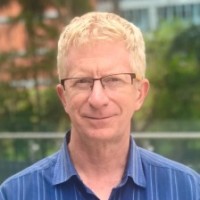 Graeme Dunkley was the Associate Pastor at Nowra Baptist before serving in ministry for a number of years in the Middle East. Graeme has also pastored other churches and worked in other roles in Mission agencies.

← Writing a Different Story: A letter to the Mission BoardHow we strive for a church more engaged in global missions →